In the 1930's there was a restaurant/nightclub named Donahue's that had a nautical theme located on site of the Flagship. When Donahue's burned down, it was replaced by Flagship 29, which was a nightclub built in the shape of a ship opening in 1938. It was located on Route 29 which was what is now the east bound lanes of Route 22.
The building burned down on June 11, 1942 and was rebuilt after WWII reopening again as a nightclub. On September 30th 1956, the remodeled ship was opened as an American Shops clothing store and then a dinner theater in 1968. The Flagship was torn down and rebuilt in 1986 by Brickchurch Appliances and has been used as various appliance stores ever since including Nobody Beats the Wiz and is currently a PC Richards.

Here is a link with info about a band called the Korn Kobblers that got their start at the 1940 world's fair and then went on to become a regular act at the Flagship.
http://www.hezzie.com/kk/kornkobblerslisteningroom.html
Listen to a recording made by the band a for radio show that was broadcast from the Flagship.

Also check out Jean Shepherd talking about the building on his WOR radio show in 1965.
Read More
Powered by SmugMug Owner Log In 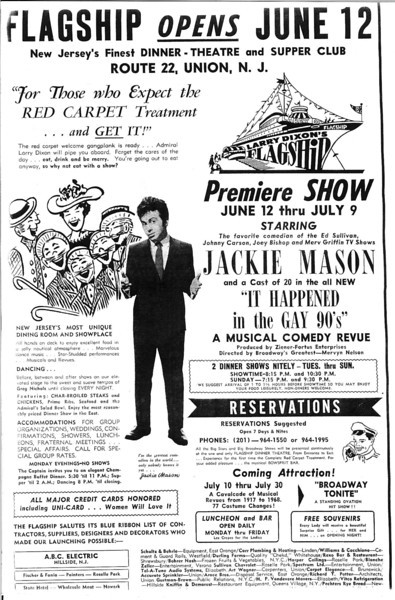